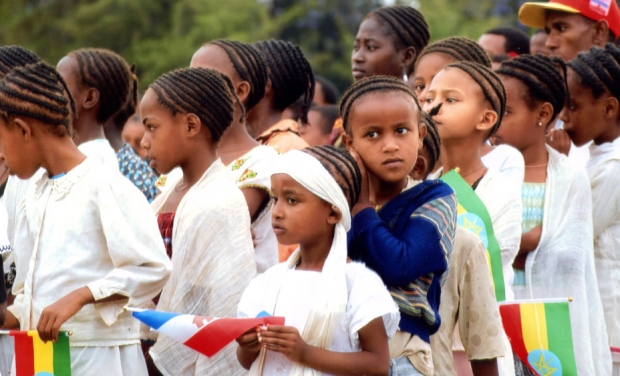 Klaus Bieber was Back in Africa

The grandson of Friedrich Julius Bieber, Africa Explorer from Ober St. Veit, travelled from 18th to 27th March 2011 via Istanbul and Addis Ababa to Bonga, capital city of Kafa Zone in Ethiopia. There on the 22nd of March 2011 he took part in the Inauguration Ceremonies of the UNESCO Kafa Biosphere Reserve.

Kafa is an area located in south-western Ethiopia which can look back on a long and mysterious history lasting for many centuries. The formerly very wide-spread forests of Ethiopia have now been reduced to only a few percent of the land area. Nevertheless Kafa still has many forests with heavy vegetation and many species of animals and plants. But above all Kafa is the country of origin of coffee and still contains a genetic treasure: Arabica Coffee growing wildly in the forests.

Now what connects this far-away Kafa with Ober St. Veit? The name Bieber! The Africa Explorer Friedrich Julius Bieber, who lived for the greater part of his life in Auhofstrasse 144, explored Kafa in 1905. His grandson Klaus Bieber had very recently the opportunity to re-activate this connection: He was participant in a journey organised by NABU (Nature and Biodiversity Union / Naturschutzbund Deutschland e.v.) which took him to Bonga, the capital city of Kafa Zone where he took part in the Inauguration of the first UNESCO Kafa Biosphere Reserve in Ethiopia.

NABU and its many partners have been involved since 2003 to safe these forests, the area of which has been dramatically reduced. At the same time they are helping in the sustainable use of wild coffee, the development of the region generally, and above all to set up the first Coffee Biosphere Reserve in the world. In June 2010 UNESCO has recognised the Kafa Biosphere Reserve of about 760.000 hectares (= 290 square miles).

A meeting with the forest farmers, who spoke about their life with and from the wild coffee, and visits to the coffee processing stations showed the visitors the uniqueness of the region and the successful example for regional development. The region shall be able to keep its natural treasures. But despite these successes, the President of NABU, Mr. Olaf Tschimpke, was worried about the future of the valuable forests of Ethiopia. Because investors for mono-cultures, the increasing extremes of the weather such as prolonged dry periods and very heavy rainfalls, and the continuous advancing of the population put increasing pressure on the old mountain cloud forests.

During this journey Klaus Bieber experienced many unforgettable impressions and elevating moments. His grandfather Friedrich Julius Bieber is still known to experts on Ethiopia and in particular to the people living in Kafa. His two ethnographic books about the empire of Kafa , which vanished after the conquest by Emperor Menelik II., and its lost culture, still count amongst the standard literature about Ethiopia.

The work of Friedrich Julius Bieber is now of particular relevance, because after a century of suppression the people of Kafa are remembering their own roots. No written records existed in the old empire of Kafa, everything was passed on verbally from generation to generation over the centuries. Friedrich Julius Bieber was one of the few who was able to report about the old Kafa as eye witness, and nobody did it as detailed and exact as him. Therefore his works (which are now translated into English) were and still are a substantial source for research about Ethiopia. Now they are also becoming important for the reviving research into its history and culture by Kafa itself. The extension of the regional museum, the establishing of a coffee museum and the re-erection of old structures, such as the former emperor’s residence above the capital Bonga are obvious signs of this re-awakening. The gratitude of the people of Kafa (Kaffitcho = kafecho), has also been expressed in the naming of a street: In Bonga there is now a "F.J.Bieber-Avenue".

The passion for Africa lived on in the Bieber Family. The son Otto Bieber travelled several times to Africa, he gave lectures on Africa and particularly on the life and work of his father, and was a thought-after informant for Austrians wanting to go to Africa. His grandson Klaus Bieber spent nearly fifty years of his life in Africa, from 1973 to 2008 he was Austrian Honorary Consul in Sierra Leone. Recently he supported the German archaeologist Dr. Ruth Sandner in connection with the museum project in Bonga and was part of the NABU-delegation to Kafa.

Additional information about NABU and the Kafa-Project is provided on http://international.nabu.de.

Additional information about the UNESCO Kafa Biosphere Reserve is provided on www.kafa-biosphere.com.

The photos below are taken before, during and after the Inauguration Ceremonies of the UNESCO Kafa Biosphere Reserve.

The new biography of the Viennese Africa-Explorer has been published.

The new biography of the Viennese Africa-Explorer has been published.