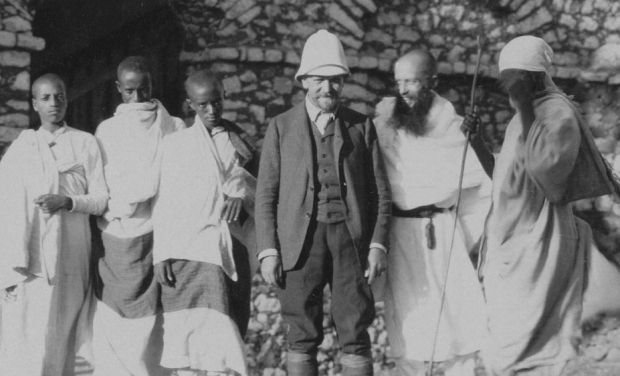 The new biography of the Viennese Africa-Explorer has been published.
24.02.2011

In 1979 the District Museum Hietzing succeeded in acquiring the collection of Friedrich Julius Bieber, which was then still in possession of the family. The objects and photographs were collected during his journeys to Ethiopia in the years 1904 to 1909. They are principally from the region of Kaffa, which is considered as the original home of coffee.

Of the many papers written by Bieber one has to mention in particular his two-volume work: Kaffa. An Acient Cushitic People in Central Africa. Reports about Land and People, about Customs and Habits of the Kafecho or Gonga and the Empire of Kaffa. The real significance of this work has been confirmed in the recent past. Kaffa never had written records, its history was passed on verbally from generation to generation until its downfall in 1897. Only Friedrich Julius Bieber, who was called „Abba Kitaba“ (Father of the Book) by the Kafetcho, recorded all information and knowledge that was still available when he visited Kaffa in 1905. Thereby he saved this knowledge over the following century of political instability. Today his work is one of the most important sources for the people of Kaffa searching for their own roots. This historical consciousness is also promoted by the German Archeaologist Dr. Ruth Sandner, who supports professionally the project of an Open Air Museum in Bonga, the capital of Kaffa.

Since 2003 NABU of Germany (Nature and Biodiversity Conservation Union) and its many partners are committed to conserve the forests of Kaffa. They are also helping with the sustainable use of wild coffee, regional development and in particular with setting up the worldwide first Coffee Biosphere Reserve. This area of about 760.000 hectares was recognised by UNESCO as Kaffa-Biosphere-Reserve in June 2010.

About this Africa explorer from Hietzing many popular and scientific articles have been written, but most of these appeared many years ago. More recently, one dissertation and two master’s thesis on Bieber’s life and work were presented. But his life history has never been described in such a concise and exact form as has been done in the booklet which is presented here. Two collaborators of the Museum – Dr. Josef Holzapfel and Klaus Bieber, grandson of the explorer – have put together from existing documents a strictly chronological live history. Many of the photographic contributions are appearing for the first time. In Ethiopia the interest in the person of Friedrich Julius Bieber, the explorer of Kaffa, is increasing, therefore this booklet is also offered in the English language. This work is not only closing a gap, but it can serve as basis for further efforts.

Here you can read the biography online (click on it to expand):